Triceratops Eurycephalus One of the best known of all the dinosaurs is this peaceful, three-horned, plant-eating prehistoric animal. The Triceratops was a heavily built four legged animal that moved in herds with their young, and attained a length of about 27 feet and weighed seven or eight tons. The Triceratops was one of the last and longest surviving dinosaurs, and lived during the theorized mesozoic era. It would have been very difficult to corner and kill, and there were certainly many of the large flesh eating dinosaurs that went looking for easier game, after tangling with this small-brained brute. Plastic parts molded in light gray and attached to sprue trees.  Thorough research for a highly accurate model, including the scale and pose. Parts attach together - cement not essential for assembly.  Skin is rippled and worn looking - very lifelike and used.  Parrot like beak, two large eye horns, a small nose horn, and an extended broad frill for protection of the neck.  Bumpy, platy, reptilian like skin all over the large body.  Informative pictorial instruction sheet included. 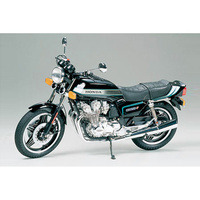 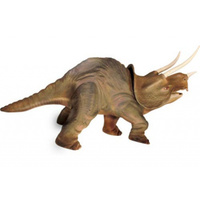