The Focke-Wulf Fw190 was a single-seat, single-engine fighter aircraft of Luftwaffe, and one of the best fighters of its generation. Used extensively during the WWII, over 20,000 were built, including around 6,000 fighter-bomber models. Production ran from 1941 to the end of war, during which time the aircraft was continually updated.The Fw190 A-6 was developed to improve the shortcomings found in previous A models when fighting with US heavy bombers. Modifications to the type to date had caused the weight of the aircraft to creep up. To combat this and to allow better weapons to be installed in the wings, a larger, bigger, lighter wing was designed. This new wing was introduced into production with the A-6. About 1055 A-6s were built between May 1943 and March 1944. Parament Item No 80245 Item Name Fw 190A-6 Bar Code 6939319202451 Scale 1:72 Item Type Static Aircraft Model Brief Length:124.5 mm Width:148.5 mm Height:51 mm Total Parts 31 Metal Parts 1 metal propeller shaft Total Sprues 3pcs sprues, wing, fuselage Camouflage Scheme Fw190 A-6 1./JG54. Hauptmann Walter Nowotny,11.1943 Released Date 2007-08 More Features The kit consists of 30 parts in light grey plastic, 1 clear for canopy part, 1 metal propeller shaft in 0.8mm diameter,slide moulded fuselage, whol Artesania 1/80 King of the Mississippi Paddlewheel 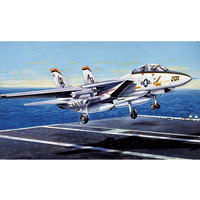